Skip navigation
Posted in Behind the News

When back-to-back hurricanes hit Texas and Florida causing widespread destruction, AP supplemented its comprehensive text, photo and video coverage of the storms with 360-degree video of the aftermath.

A valuable visual storytelling tool, the 360 footage offered viewers a close-up look at the damage left behind by hurricanes Harvey and Irma.

“Harvey was a devastating storm that produced powerful images, capturing the world's attention. But none of those photos or videos compared to the immersive experience that our 360 videos offered,” said AP Digital Storytelling Editor for Business News Scott Mayerowitz, who shot 360 video in Texas. “Instead of a large, sweeping shot, our videos provided an up-close and intimate look at the struggles the people of Texas faced.”

Mayerowitz added: “It's one thing to see a flooded street but another to be riding along in a boat completely surrounded by water. Viewers were transported to flooded homes, seeing first-hand the scope of the destruction. And as the cleanup began, that same 360-degree technology highlighted the personal toll: the couches, walls, flooring and possessions that piled up on street curbs.”

AP journalist Trenton Daniel, who was shooting in South Florida before Irma made landfall, and video editor Claudia Prat, who shot and edited AP’s 360 footage in Texas in the week after Harvey hit, recounted how they set out to create compelling, immersive journalism.

Prat: It’s unique -- 360-degree video allows viewers to see everything that is going on in one scene without any kind of framing. In many cases, when filming we are in the middle of what’s happening. We press “record” and we let the events unfold in front of and all around the camera. It’s this juxtaposition of elements that I think conveys the scenes of a climate disaster in a very unique way.

Daniel: I would note that the 360 camera, because it is still an alien piece of technology, goes without notice. So when we set the camera in the middle of a Florida Keys trailer park whose residents are cleaning up debris, they pay little mind to the little device on a tripod -- like a fly on the wall. It seems that a 360 camera isn't as intrusive as a traditional video camera, so the subjects go about their way, oblivious to the camera before them.

How did you shoot and edit the material? What challenges did you encounter?

Prat: We shot with low-cost cameras that allow for quick production and post-production. During Hurricane Harvey we used the Samsung Gear 360 camera and during Hurricane Irma we used the Nikon KeyMission 360. Because I shoot and edit, I would spend the day filming and, as the stories were unfolding, I was already thinking about how I would edit the pieces. This meant that by the time I would get back to the hotel I already had a script in mind and I would stitch only the most relevant footage. I stitched using Autopano Video Pro. I edited the content at night and sent it to New York, allowing us to have content online in less than 12 to 24 hours.

Daniel: A big challenge was sending the video files. This meant selecting only a few clips and sending the best ones, because it would take several hours to transfer. That it took so long to send meant making sure the video wouldn’t be dated in a few hours. I didn’t want to send a video of downtown Fort Lauderdale, eerie and empty of tourists, if we weren’t able to post the video until after the storm had already passed and caused considerable damage.

What elements did you look for to best tell the story?

Daniel: For me, the stories were pretty obvious: hurricane preparation, the eeriness before the storm, the damage after the hurricane and residents returning home to assess the damage. So I focused on the strongest visual elements to tell those stories. That meant finding scenes that offered a full 360 view. I shot video of a damaged crane in Fort Lauderdale but scrapped the shot because there wasn’t anything else to look at other than the fallen crane.

Alfonso Jose pulls his son in a cooler as he and his wife wade through their flooded street in Bonita Springs, Florida, to reach an open convenience store in the wake of Hurricane Irma, Sept. 12, 2017. (AP Photo/David Goldman)

Prat: I tried to look for three elements: location, timing and key characters. For example, in “The Pain of Going Home,” the locations -- mostly the second and third location that appear in the video -- were in one of the most destroyed neighborhoods we had seen: all of the mobile homes had been wiped out by flooding. Also, the timing was key. We arrived at the neighborhood at the same time as people were returning to their homes and realizing the amount of destruction that had happened. The 360-degree camera was able to capture that moment. 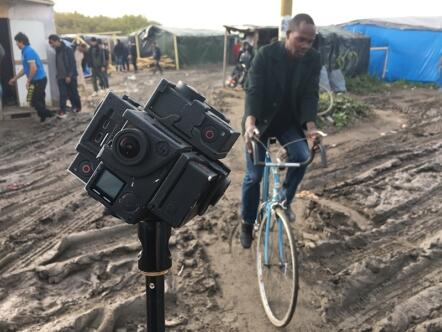