To help in calling winners and explaining why candidates won, The Associated Press has been testing new ways to survey voters around Election Day. After all, in the last presidential election, more than a third of voters did not go to a polling place on Election Day but instead voted ahead of time or by mail.

With a $250,000 grant from the Knight Foundation , AP hired GfK Custom Research to conduct an experiment with online surveys during last fall’s general elections in Kentucky and Mississippi.

A voter casts his a ballot in Georgia's primary election at a polling site Tuesday, March 1, 2016, in Atlanta. (AP Photo/David Goldman)

Here’s what happened next, as explained by David Pace, news editor for race calls and special projects:

GfK Custom Research used its probability-based online panel of 55,000 people across the country to survey voters in the two states. AP wanted to know if the online methodology could provide accurate and timely estimates of candidate vote percentages in small states that are difficult to poll with traditional methods. The GfK survey had the correct winner in all seven statewide races polled in the two states, including the Kentucky governor’s race. Pre-election polls had predicted a win for Democrat Jack Conway, but he ended up losing to Republican Matt Bevin by almost 9 percentage points. The GfK online survey had Bevin winning by just under 5 points. Overall, the online poll had an average error of 3 percentage points on candidate estimates across seven statewide races. The surveys in Kentucky and Mississippi built on experiments GfK conducted for the AP in Georgia and Illinois during the 2014 general election. Online panel estimates of candidate vote percentages in the gubernatorial and senatorial races in each of those states proved to be much more accurate than exit poll estimates. In Georgia, for example, a combined exit poll of Election Day voters and a telephone poll of absentee/early voters had Democratic winners in three of the four races. The online panel estimates correctly predicted Republican wins in all three races. Here are links to GfK’s full report on each set of experiments – Kentucky-Mississippi and Georgia-Illinois. The AP is planning additional surveys using online panels during elections later this year. Plans are now underway to use the GfK panel to survey Democratic and Republican voters in one of the presidential primary states this spring. And there almost certainly will be additional experiments with online polling during this fall’s presidential election. It should be noted that results from these experiments are not being used in AP’s election coverage or race calling decisions this year. Instead, the AP hopes the experiments will show the way to more accurate and less expensive survey methods for the 2017-2020 election cycle.

You can read more about the Likely Voter Test here.

You will also find additional data about the Kentucky-Mississippi survey here and here. 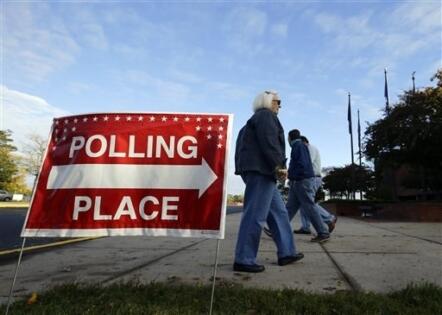